About The Girl That Turned Into A Cat 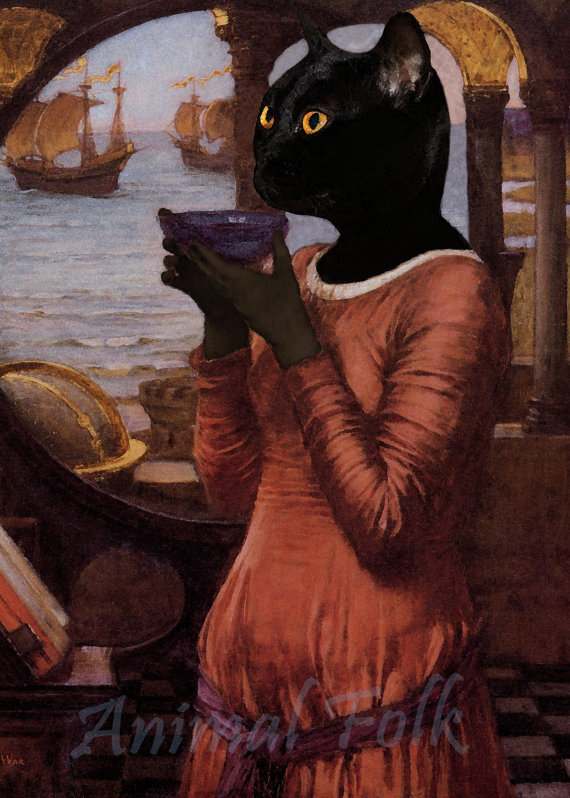 There once was a girl who could turn into a cat. She had no control over this, as it happened every night. Around dusk, her black hair grew rapid over her entire body, until it became a shiny coat of fur. Her eyes, green as morning grass, reflected yellow into the light of her candle. Her teeth grew long and sharp, and her ears perked like fuzzy triangles over her cat like face. One could say she was a rather pretty cat, with a long tail and surprisingly pink pads underneath her black paws.

Once dusk faded into night, the cat-girl leaped into darkness, on the hunt for mice and rats. She ventured wide from her own yard and into that of others, but only after midnight, when she knew other cats would have dispersed in expectance of her, just as she avoided these areas at other times of night, when other cats would be about. They had come to this understanding to avoid territorial disputes, and because of it, she hardly ever saw any other cats while she took the form of one.

The girl was quite happy during the day, when she napped and played with her dolls, and at night, when she dissected mice with her curved claws and taste for blood. But, as is the case with young girls sooner or later, there came a time where her dolls collected dust, and her mind wandered to the red headed boy she saw twice a week: on Thursdays, at the market, where he caught her eye once through the crowd, and on Sundays at church, where his sleeve once brushed hers on her way to communion.

She lived at a time where it was unusual for girls to approach boys of any kind, and if the boy should have any interest in her, he would have to wait until the yearly Youngster Fest, where it was the custom for boys and girls who reached maturity, to invite one another to dance, and thus, at last, get a chance at a conversation with those of the other sex. There was nothing for the girl to do, but look forward to her Thursdays and Sundays, and to savor the precious moments where she could lay eyes on the ginger lad.

As the years passed, her fondness of him grew, and she longed for the year where she could partake in the Youngster Fest. But as her legs grew tall, her sense of reality grew, and it nestled the idea in her that even if he should invite her to dance, she would never be able to stay after dusk, nor would she ever be able to become his beloved in marriage.

This realization filled her with such sadness, that she became rather sloppy in her matters of transformation. Where she used to be careful as to where she would change, she now wandered through the house and her own yard, while her hair grew and her knuckles cracked. At dawn, she sometimes transformed right outside people’s windows.

One morning, she had just caught a fat rat, and was still devouring it when she felt her mouth grow large and her teeth turn flat. Yet, she tugged at the rat’s flesh and finished him off when she had already turned into the young lady she had become.

‘t Was then that the most peculiar thing happened. She felt nothing throughout the day, but at dusk, her hair grew lighter than usual. She could almost feel the wind rush through her coat that night. Her chase went slower than usual, and she only caught six mice that night, instead of twelve. As the cat-girl sat by the stream, waiting for dawn, she toyed with the idea that maybe, it had something to do with her eating that rat as a girl, instead of a cat. So she carefully hunted for a rat that had just returned from a swim. She bit the rat’s throat, but made sure it didn’t loose too much blood, by keeping her paw firmly over the wound. Then she sat back and waited for the first signs of daylight. She sat patiently until she had taken form of her lady like self, and only then did she eat the rat.

That night, her transformation happened even slower than the night before. Her fur now showed bald patches, and her teeth remained solemnly blunt.

This discovery lightened the girl’s spirits, as she knew that if she ate enough rats, her transformations would cease all together, and she would be able to enjoy the Fest, and hopefully become the ginger lad’s girl one day. Lively with new motivation, the girl stepped into the field during the bright of day, and hunted rats with almost the speed of a cat. She dug them out of their holes, chased them down and fished them out of the water. She bit their throats and sucked them dead, but always made sure to return to the village with an apron filled with blackberries, to explain the purple dried stains on her lips.

The evening came at last, when the girl waited for her transformation, which did not come. In her excitement, she ran out, two legged, into the night. She ran through the yards she knew so well, at a time when the other cats were out. She climbed walls and broke through gates, until she arrived at the ginger lad’s yard. There, she knocked on the back door, but no one stirred. She threw pebbles at the windows, but no candle was lit. Eventually, disappointed and suddenly shamefully aware of her display, she turned around to leave through the yard she had come from. There, on the wall that separated the yard from the fields beyond, sat a ginger cat. He stared at her, in the awkward, demeaning way only cats master, and let her stare back at him. They remained like this for a full minute at least, until the girl had grasped the truth that had enfolded before her. Then, the ginger cat turned his back, jumped off the wall, and disappeared into the night.

The girl that could turn into a cat, but had turned into the rather dull form of a lady instead, never recovered from the harm she had unknowingly caused herself. Her loneliness grew larger than her love for the ginger lad ever was, and because of it, her bitterness aged her once sparkling eyes. She developed a jealousy toward all black cats she came across, and approached them with vile hatred.

The girl that could once turn into a cat, but had turned into the rather dull form of a woman instead, cursed all black cats she came across. She ill-wished them, and spread untruths about them. The rumors about these black, unfortunate creatures traveled from this village to the next, soon they were hunted all over the land, and with them, the girls they were at heart.

The woman who once was a pretty girl that could turn into a cat, transformed nevermore, and spent her days bitter, dull and alone. She never ate another rat, yet devoured since then, many a cat.